Community is important for writers. (That goes without saying.) I’m lucky to be part of one of the best writing communities in the world: ModWords.

#ModWordsFest — Waterford’s annual celebration of all things artistic, poetic, musical, and everything in between — happened two weeks ago. A day of short plays, an art sale, several open mic events, book launches, skits, live music — you name it, it was on the ModWordsFest itinerary.

(My own short play, Everyone’s a Critic, which I cowrote and starred in, was on the big stage at Theatre Royal. I also performed Sunshine Nova again — my first reading didn’t go so well — for the ModWordsFest finale, and I crushed it. But we’ll talk about all that later.)

As we all scrambled to prepare for this glorious shitshow — to paraphrase ModWords founder and all-round legendary human Anna Jordan — I was reminded of just how special this community is. Magical, even.

And I’m still wondering why on earth ModWords hasn’t spread like wildfire yet. 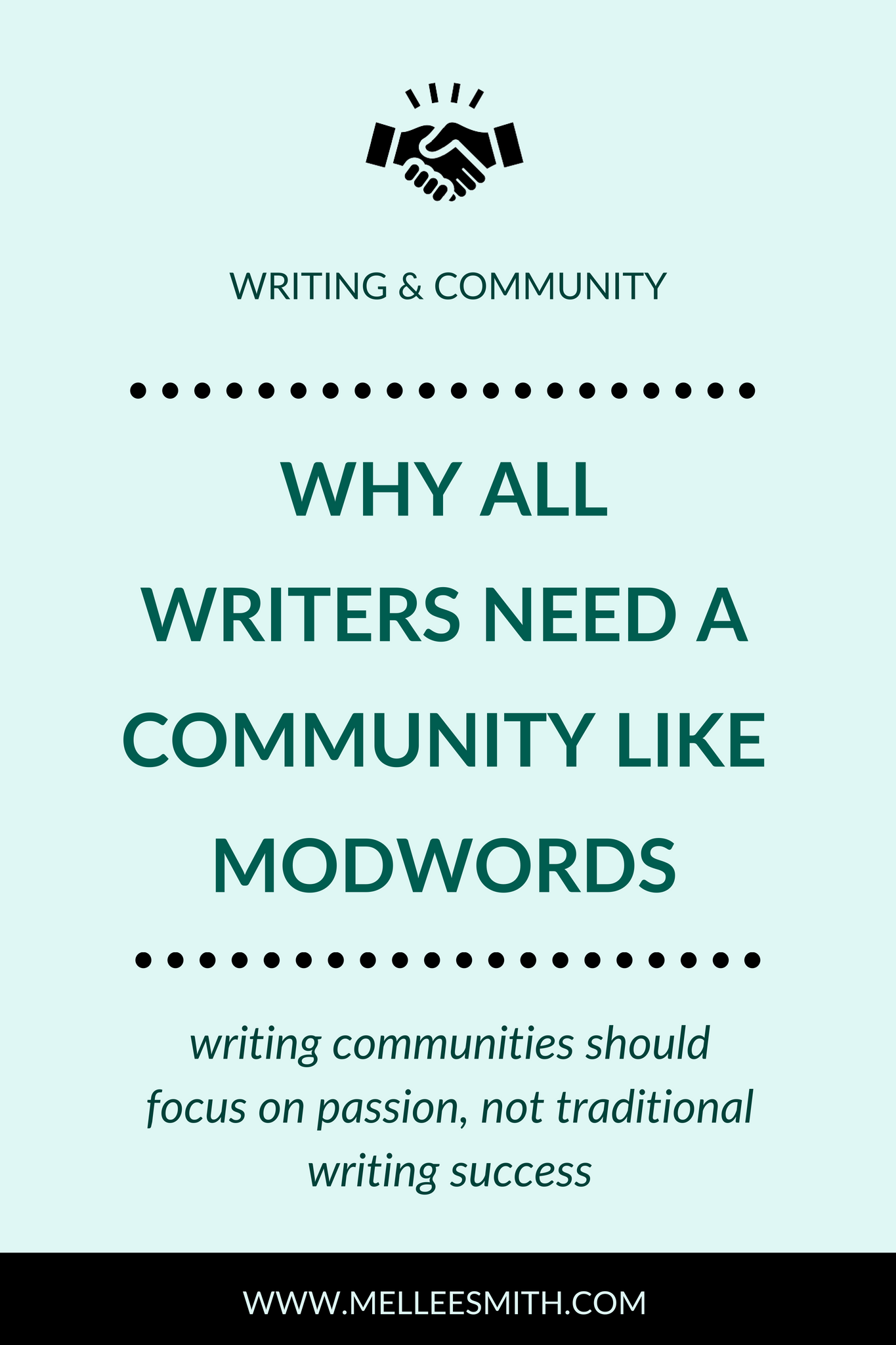 What writing communities often get wrong

Picture it: you’re at a writers’ festival, clutching a coffee cup and feeling uncomfortable in a button-up and slacks. You came to learn some tricks of the trade from successful writers, authors, and creatives.

Conferences and festivals are great places to network with other writing professionals and learn more about your craft — but they can be detrimental to those who write because they just like to.

(Which, by the way, is perfectly acceptable. Just because you’re not published doesn’t mean you’re not a writer!)

Another reason why expensive events like conferences and festivals hurt budding writers: they mostly cater to established writers. Those who haven’t already made a name for themselves often feel like a fish out of water.

Sure, these events often provide the tools to, theoretically, achieve the same success, but there’s a catch — they cost a pretty penny.

And besides, not everyone is looking to be published. (Which, again, is totally fine.)

What the ModWords community gets right

ModWords is different from other writerly spaces. We’re not a writers’ group; we’re not an open mic event; we’re not a conference. We’re a community. (And we’re affordable — all ModWords events are free, with the exception of some inexpensive classes.)

Strip away the writing anxieties — the rejection letters, the publishing woes, and all the other traditional successes that writers chase after — and you’re left with one thing: the love of stories.

That’s the core of ModWords. We get together and we read our work because we love to write it, and we love to share it. For me, that supportive, laid-back atmosphere fosters more creativity than any stuffy writers’ conference ever could.

Passion is most important, but connections are great, too

“You can’t talk about magic without talking about Anna Jordan.” I’m paraphrasing Martina “Teeny” Collender, renowned Irish playwright and volunteer at Waterford Youth Arts. She gave a brilliant speech at one of the open mic events about how Anna brought this community together.

The whole collective started out as a few people sitting in a pub reading poetry. Today, ModWords is a nationwide movement that’s given hundreds of creatives of all skill levels and backgrounds a place to share their stuff.

Passion is at the heart of the ModWords movement, but this community doesn’t lack the connections artists need, either.

Anna Jordan is at the helm of this ship, and damn, if she ain’t a fine captain.  Apart from ModWords, she’s been uber busy making a name for herself at the Comeragh Wilds Festival and All Together Now, and she meets with big-name brands and nationally acclaimed poets and authors on the regular.

In other words, if you want to achieve more traditional writing success, Anna Jordan will put you on the right path.

You want to publish your book? She’ll keep pushing you until the draft is done. You want to host your own event? She’ll put you in touch with the right people to promote it.

Anna is a doer, not just a thinker. She puts ideas into action, and she’s just the type of person every strong writing community needs.

Let’s not forget about Alana Daly Mulligan and Nicola O’Cooney, two university students who set up a ModWords branch in Cork. You might recognize Alana from a variety of places, whether it’s her volunteer work with BuskAid or her very own production company, Phantasmagoria Productions. Nicola’s enjoyed similar success: she’ll join Alana and Anna at the All Together Now festival next week, and she’s performed her work at a variety of festivals and events around the Southeast.

This is a community of doers if there ever was one.

Want to start your own writing community? Get off the damn internet

Facebook groups, Twitter lists, blog subscriptions — those are all important for writers. But if you want to be part of a community that will really help you get shit done, shut down the laptop, call up a few writer friends, and go down the pub. (No, I’m not joking.)

Creating your own community really is as simple as that: gathering with like-minded folks who love the craft just as much as you do.

When Anna created this community, she wasn’t thinking about marketing, PR, branding, grant applications, or any of the other administrative stuff she now deals with. She did it for the love, and that’s the key reason why ModWords is so successful now.

So gather. Crack open a few cans and belt out your poetry to your writer friends. (Yes, even the bad poetry — especially the bad poetry.) You never know where it might lead…

Forget about the expensive conferences, the panels of experts who will help you get published quick — all writers should be able to enjoy a community like ModWords.

If there’s one thing I’ve learned from ModWords, it’s this: get off your ass and do the damn thing. (How’s that for a call-to-action?)

This site uses Akismet to reduce spam. Learn how your comment data is processed.

6 creativity tips for writers to inspire your artist child

Feel like your writing life lacks creativity? Feeling uninspired or burned out? Check out these creativity tips for writers, by a writer!

Decided to join Camp NaNoWriMo and flex your writing muscles? Check out these CampNaNoWriMo prompts and ideas!

Overcoming writer’s block with a letter to the editor

Some people say there’s no such thing as writer’s block. Those people are full of shit. Overcoming writer’s block isn’t easy, but it is possible.

CONNECT WITH ME ON SOCIAL

You can find out more about which cookies we are using or switch them off in settings.

(Just be sure to read the guest post guidelines first.)

GOT A QUESTION ABOUT NOTION?

The Crystal package is perfect for content managers who know exactly what they want. You’ll provide a detailed brief complete with keywords, target audience, customer quotes, links to include, and a call to action. I’ll deliver a polished, search-optimized blog post and a complimentary round of revisions!

This website uses cookies so that we can provide you with the best user experience possible. Cookie information is stored in your browser and performs functions such as recognising you when you return to our website and helping our team to understand which sections of the website you find most interesting and useful.

Strictly Necessary Cookie should be enabled at all times so that we can save your preferences for cookie settings.

If you disable this cookie, we will not be able to save your preferences. This means that every time you visit this website you will need to enable or disable cookies again.